This award recognizes someone who has been a member for at least 5 years, who is actively involved in teaching snowsports to the public and who demonstrates a positive role model.  They must exceed the normal criteria for teaching excellence and must demonstrate a prolonged history of service to the public as well as service to their school and PSIA Northwest as evidenced by mentorship or other active involvement. 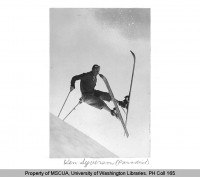 Who was Ken Syverson?

Ken held PNSIA cert number 1. He became the first ski school director at Paradise in 1936 and was known as one of the best ski instructors in the Northwest. He was the PNSA Certification Chairman from 1947-48, when ski instructors and race coaches were a part of the same organization (PNSA). Quote from It Started In the Mountains:
“Certified in 1939, was director of the first ski schools at Paradise, Baker and the Seattle Times Free Ski School. He was one of the first examiners in the region and taught up to about 1962.” He passed away in November 1972.

Recipients of the Ken Syverson Instructor of the Year Award: